Yesterday I finished my third sweater of the year, a vest by Laura Aylor. I knit this as a test knit for her and was glad I got the chance to take a crack at it before anyone else! Today wasn't a great day for taking photos so my pictures aren't that great, but you'll get the idea. 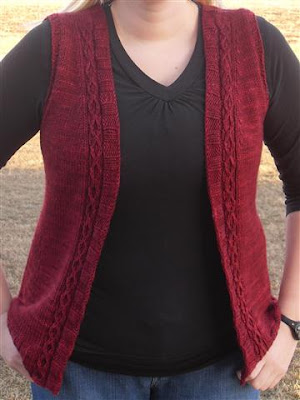 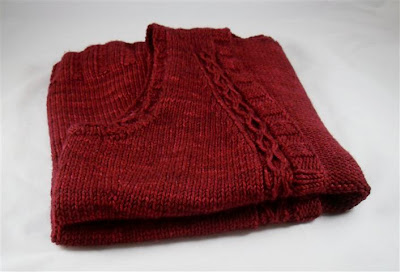 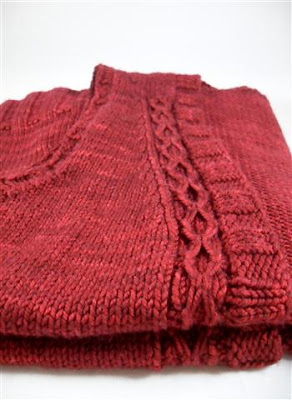 This was my first project using this yarn and Madeline Tosh in general. I've been lusting after the colors for awhile and I wasn't disappointed. The depth of the colors is amazing! I'm glad I alternated skeins every two rows, because one of the skeins was slightly lighter than the others. The yarn is really soft, too. This definitely won't be my last project with Madeline Tosh. I have a sweater's worth of Vintage for my fifth sweater and some Pashmina on order from my local yarn shop for my sixth. Plus I have a skein of the chunky left over from this project. I'm thinking I might make a hat out of it.

I only made a couple of modifications to the pattern, out of personal preference. I added about 2" of length to the body before starting the waist shaping decreases. I was also worried that the ribbing might lay weird as it was written in the pattern. You can kind of see in my pictures that the ribbing around the waist is pretty flattened after blocking, which is what I wanted. I wanted the neck and shoulder ribbing to match that, so instead of knitting the amount of stitches called for in the pattern for the size I was making, I used the stitch counts for the medium. I had zero trouble picking up that amount and didn't feel like I was stretching them too thin.

I absolutely loved making this vest and I think it looks fabulous. The cable pattern was made by changing the order of slipped stitches. I thought that was an interesting technique and something I'd never done before.
This pattern was great and I'm definitely thinking about using it again- maybe substituting a different cable pattern or a lace pattern to change it up.
Posted by Allison at 7:56 PM 10 comments:

As soon as I finished my Star Trek sweater last weekend, I cast on for a cabled vest. I'm test knitting this vest for Laura Aylor. I impulsively signed up for this test knit while perusing the Free Test Knitters board on Ravelry in the process of posting my own design. You can see what the finished product will look like by checking out her project page on the prototype. This is my progress so far: 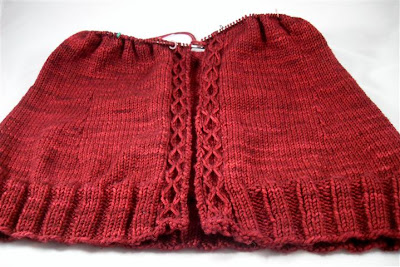 The deadline is March 3rd, but I should have no problem completing it by then. I fully plan on counting this vest as one of my twelve sweaters. It'll be pretty nice to have three out of twelve done by the time March rolls around.

I actually did two swatches for this vest- one on eights like the pattern called for and then one on sevens that got me gauge. In the past, I wouldn't have bothered with swatching and gone up a size because I thought I was a tight knitter. I think I've changed over the last year or two because now I either use the recommended needle size or go down. Has anyone else's knitting tension changed over the years?

As a quick little aside, my copy of The Principles of Knitting arrived in the mail today. I didn't expect it to be so big- it's like a textbook! I also got a copy of Sweater Design in Plain English earlier this week. Between the two, I have plenty of reading material.

Hope everyone is having a good week; I'm off to Knit Night!
Posted by Allison at 5:37 PM 7 comments:

FO: He's Not an Extra

Yesterday I finished knitting the sweater I was working on for my boyfriend, making it the second sweater of the year. I was hoping to have this done by Valentine's day, but it took me a bit longer than expected.

This sweater is loosly based off of Star Trek: The Next Generation's uniforms. As part of it, I ordered a com badge and rank pips to go with it, as well as a TNG phaser.

While I loved the idea of this sweater, its actual execution was a bit "meh" for me. My boyfriend requested extra long sleeves and extra length on the body. That wouldn't have been so bad by itself, but the sweater pattern doesn't have much in the way of decreasing after splitting up the front and back by the armholes so the shoulder seams ended up really slouchy. The sweater just seems too big because of it.


I made a lot of modifications to this sweater. Some were based on my own preferences but some were due to error in the pattern. I used 1x1 twisted rib for the cuffs and body ribbing instead of the 3x3 that was specified, I continued the fake purl seam stitch all the way up the body instead of stopping after three inches, and I knit the i-cord edging around the neck in one piece instead of two so I didn't have that many ends to weave in afterwards.

The pattern had the short row shaping for the back reversed so there was more fabric on the shoulder edge than the neck edge. Seems that part was designed as a Romulan uniform, not human. I had to fixed that and then wing the collar because the stitch number that they suggested be picked up was much too small. It was pretty frustrating having to fix these errors in the middle of knitting all that stockinette. Oh well, Brian is very happy with it and that's all that matters.

I updated my knit meter counter and I've already passed two miles this year. That's about 1/3 of what I knit all of last year; I'm on a roll! 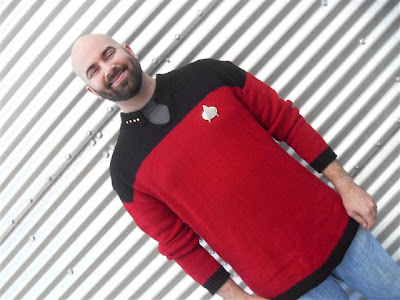 Friday night I bound off the stitches on the prototype of my first ever design! I'm calling the pattern Tanagra. 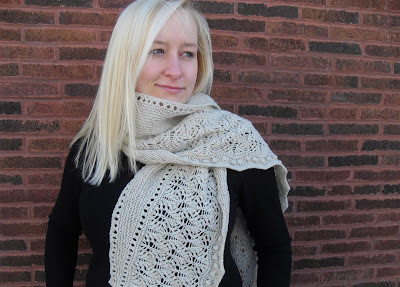 The intro I'm using to describe my pattern is: "This worsted weight shawl features a beautiful lace section and elements from your favorite aran sweater. Worked from the bottom up, it utilizes short row shaping in garter stitch to give it a crescent shape and keep you warm on a chilly day."

It's generously sized: 72" wide and 15" deep at the widest point. I'm really happy with the way it turned out and I know I'll use it all the time. The Shelter yarn is really lofty and has a little bit of darker tweed flecks. I'm looking for pattern testers, so if you're interested, check out this thread on Ravelry! 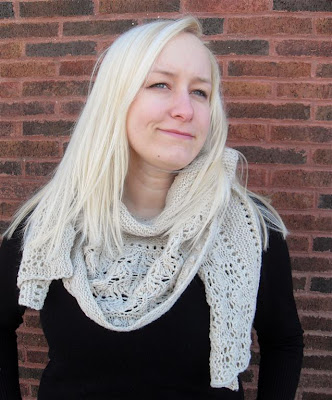 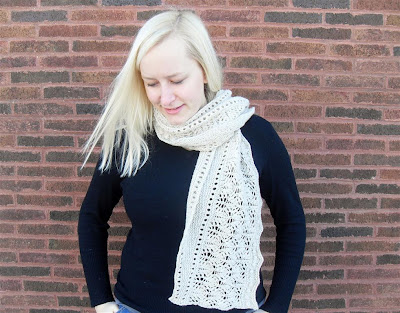 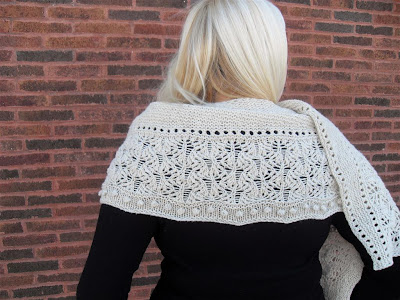 This shawl is really big and super warm. I verified this: it was about zero degrees with windchill while my boyfriend was taking pictures of me. We'd take photos for about two minutes then I'd get really cold so we'd go sit in the car to warm up again. This is what it's like living in Wisconsin in the winter: 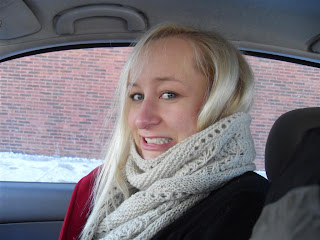 In the last week or so I've gotten a bit sidetracked from the sweater I'm knitting for my boyfriend. I'm going to blame in on the miles of stockinette stitch that's involved. Somehow, I got the idea in my head that I should try designing something as a goal for the year. I really noticed the lack of worsted weight crescent-shaped shawls on Ravelry, so I decided to embark on that little journey. This is where I'm at with it: 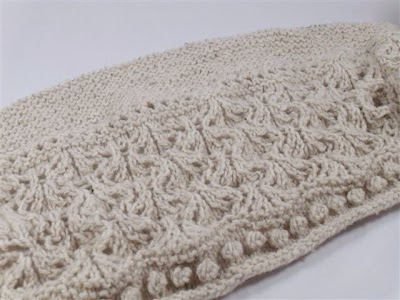 I had about 90% of the top short rows done this morning (I got to knit in the car while a coworker drove us to a meeting two hours away- awesome!) when I realized I wouldn't be able to make it with the amount of yarn I had. My options were either to buy another skein of yarn or rip it out and make the short rows less steep so they wouldn't take up as much yarn. I'm using Brooklyn Tweed's Shelter, so buying another skein isn't as hassle free or cheap as driving to the store, so I decided to rip it out. 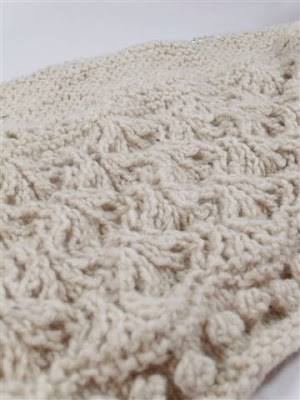 It was painful, but it's for the best. Hopefully I should have it finished by Friday night and then I can take pictures this weekend.

That leads me to my other work-in-progress, my Winnowing. I absolutely loved this pattern when it came out in Wool People 2, so I ordered the yarn the same day. I cast on on January 31st (due to boredom) but I only knit it that one night and haven't touched it since. My plan is to finish my shawl, then my second sweater of the year, then Winnowing. I think I can do that by the end of February if I stay focused. 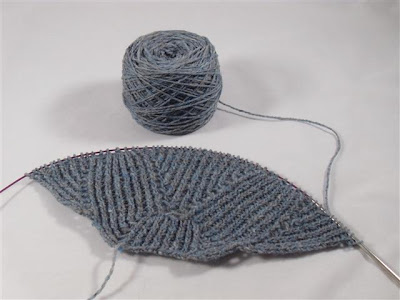 As for the sweater, I haven't made much progress since my last post about it. The body section is done and I have about 7" of the back shoulder region done. My unofficial goal is to finish it by next weekend. Hopefully I can make it happen.
Posted by Allison at 7:05 PM 8 comments:

On Ravelry, there's a super huge discussion thread where people post pictures of their yarn stashes for all to see. It's very entertaining and sometimes shocking to see what kinds of yarn people buy and how much of it. This is mine: 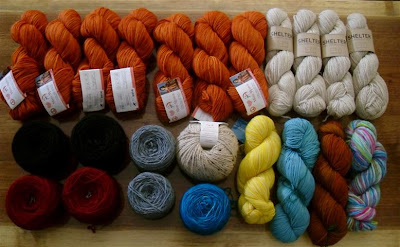 The six cakes in the lower left hand corner I wouldn't technically count as stash as they're for works-in-progress. Continuing counter clockwise, I have a ball of worsted weight tweed yarn left over from my first sweater of the year, four skeins of fingering weight yarn, a skein of handspun yarn I bought on Etsy to give handspun yarn a try, four skeins of worsted wool for a shawl I'm designing, and lastly some alpaca/wool yarn for another sweater. I also have two big skeins of sport weight alpaca, but they may or may not have accidentally got put in the garage with the Christmas decorations in the last month.

If you're interested in the specifics, you can find them on my Ravelry Stash page.

The stash I have right now is a bit bigger than I would like. I like to keep it pretty small, otherwise I tend to get knitter's ADD and cast on a bunch of projects.

In other news, I bought two swivel Ottlites on sale for $20 each. I discovered I needed one when I started knitting my current work-in-progress sweater, which is partly black. I love the white light they give off, which really helps when I take photos using a light tent. They really help with getting an accurate color of yarn. 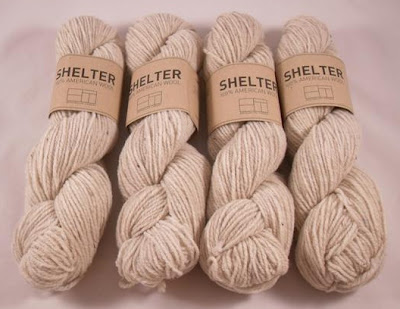 I hope you enjoy the weekend and the Superbowl (if that's your thing)!
Posted by Allison at 6:54 PM 5 comments: