Today I have a very special finished object to share with you guys. It wasn't knit by me,  it was knit by my boyfriend, Brian! I taught him the basics of knitting about a year ago and he's knit off and on (but mostly off) since then. His first project was a dishcloth with the Star Trek Insignia on it, and he's made three more dishclothes since then.

I think all the knitting I've been doing lately has rubbed off on him because he picked it up again. We took a trip up to our local yarn store where he got some circular needles and three different types of yarn. In eight days, he made this: 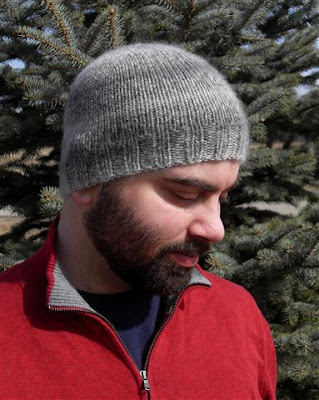 It was so much fun to cheer him on as he was knitting this hat. It was his first time using circular needles, double pointed needles, and even wool yarn. He learned how to knit in the round and how to decrease. It's been a long time since I first tried those techniques, so it was a bit nostalgic. I certainly don't miss the frustration of trying to wrangle double pointed needles as a newbie.

He's already started on another hat in the same pattern using up the rest of the skein of Eco Duo. It's going much faster this time and he's getting a lot better at fixing mistakes. After that, he's going to make a couple of more hats. I'm not much of a hat person so I don't normally knit them. Once he uses up the yarn he bought, he'll have made more hats than I ever have!

Maybe someday I can convince him to give sweater knitting a try! Or that sweater vests can be stylish....
Posted by Allison at 6:33 PM