Today I have two finished objects to share with you that I made in March that I've had to keep secret for awhile. They were birthday presents for my aunt and sister, respectively. Coincidentally, both projects used the smocking stitch.

The first project is a mug cozy. I'll start by saying aunt loves hot pink and lime green. A couple of months ago I was perusing the handspun yarns on Etsy because I wanted to know how they knit up when compared to commercial yarns. I happened to find this yarn- a single ply yarn that was thick and thin and in bright crazy colors. The colorway name was Crayola. I knew it would be perfect for her gift so I ordered the yarn.

It only had 125 yards so I couldn't make anything big, so I decided on a mug cozy. This pattern was a quick knit, although if I made it again I would skip the bottom part altogether and just do the smocked part around the sides. The pattern really shows off the color changes in the yarn, and even the thick and thin changes.

I did make a mistake on this project. I used 6s for the bottom of the cozy as the pattern calls for, but I accidentally used 7s on the smocked portion. I had a pair of circular needles sitting out that I thought I had last used on my Nightlock, which would have been 6s. Turns out I last used them for my White Pine swatch, so they were 7s. I don't think it made a huge difference, but let that be a lesson- always double check your needles. :) 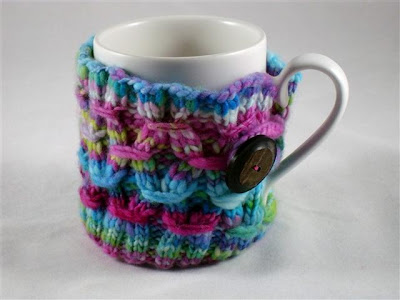 
The second project is a larger version of the smocked cowl pattern I designed. This one is infinity sized. I used two strands of Cascade Epiphany held double. That yarn was such a joy to work with. It's 60% alpaca, 20% silk, and 20% cashmere. Can you say soft?! I was honestly getting kind of sad as I was running out of yarn towards the end. I guess that just means I'll have to order some more.

I chose gold as the color because it's one of my sister's school colors. I really like the way it looks in the smocking pattern; it's like little bundles of wheat.

I've put the pattern, called Ziyal, up on Ravelry as a free download. I hope you enjoy it!