Yay, I finally finished another sweater! I started this one back in March, and it's taken me awhile to complete it. It sat in hibernation for a bit while I avoided the twisted rib that needed to be done on the cuffs. Once I pushed past that, it wasn't actually that bad. 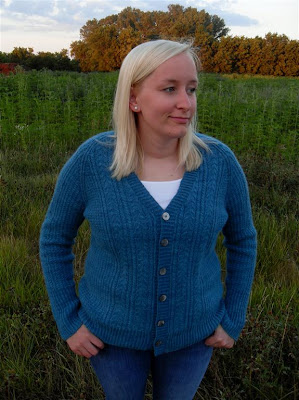 I made very few modifications to the pattern. The first was to only cast on 62 stitches for the arms instead of the 74 called for in the pattern. I knit about two inches the way it was written and they would have been really baggy. I really liked how slim fitting the sweater was in the pattern's photos. The second modification was to knit two extra rows on the button band and to use two yarn overs instead of one when making the holes to account for the size of the buttons I used.

I found these really cool, somewhat shimmery buttons at Hobby Lobby. The ones I had originally planned on using (which were slightly larger, off-white buttons with darker "peanut butter cookie marks" on them) just seemed to overshadow the texture of the sweater. I need to find a good pattern that can handle awesome buttons like that. 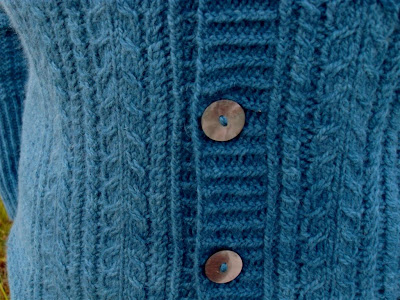 I got this yarn at Madison Knitter's Guild Knit-In back it March. It's always great when you can use local yarn for a project.
I think my favorite thing about this cardigan is the subtle texture. The yarn is slightly hazy, so it does make the cables "pop" less. However, I think it really makes everything blend together nicely. The broken rib sections on either side of the cabled sections look especially good because of the yarn. This sweater really has the "boyfriend cardigan" feeling to it that just makes you want to put it on and curl up in front of the fire with some hot chocolate. 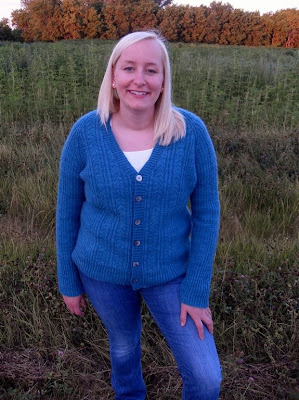 This was my first Amy Christoffers pattern. The pattern was confusing in some places (the broken rib pattern really wasn't defined well, for one), and it could definitely use some paragraph breaks in it so you're not constantly loosing your spot, but I really love the way it turned out. And since I'm 100% a product knitter (ooh! I want that!), it was totally worth it! I'm planning on knitting another one of her patterns, Acer, for my Ravellenics project later this month.
Posted by Allison at 10:33 AM